This is the story of how I survived selection and became a CTC Cadet!

As mentioned in my last post, I’ve always been fascinated by aviation, and have spent the last few years working on earning my Private Pilot’s License (PPL). However, that wasn’t enough to satisfy me, when I knew I could make a career out of my passion!

Because of this, I had been researching flight schools for some time during my PPL training. This led to visits to CTC Aviation, CAE Oxford , and several trade shows including the highly useful Pilot Careers Live fair to help me find out more about my options and help decide how I wanted to start my future.

Eventually I set my sights on CTC, as to me they gave by far the best impression! Their job placement statistics, amazing performance protection, and modern facilities were all highly appealing, as was the extremely friendly atmosphere.

My original plan was to apply to CTC after I finished my A-Levels. However, I ended up applying for the Virgin Atlantic MPL scheme in December 2014 first, as I felt that the offer of a long-haul job with barely any qualifications needed was an amazing opportunity! Sadly, I was unsuccessful in the application as I was too nervous when it came to the interview; I just wasn’t quite ready then.

This didn’t deter me though, and after an excruciating 6-month wait I reapplied after my A-Levels for the white-tail (where I don’t have any airline partner) Integrated ‘Wings’ course. Through the now-familiar process, I sent in my application online and waited anxiously to hear from CTC whether I would have another go at the assessment!

Surprisingly soon after, I heard back that I could go for another attempt on the 18th of August! Fortunately this gave me several weeks to prepare, and I did everything I could to make sure I made it through this time. I got lots of really useful feedback from my last try, mostly suggesting I needed to practice my confidence and interview skills. I was really lucky in this case, as a friend of my parents is a judge who was willing to give me some practice and advice; this was pretty scary but I came out feeling very confident with my skills! I’ve added a few links at the end of this post which helped me prepare; hopefully they’ll help some of you, too!

As a bit of a treat (I like to think it was “inspiration” too) I decided to fly down to Southampton rather than get the train like usual. I also squeezed in a little bit of plane spotting in Manchester – I couldn’t help it! Even more exciting, I got a chance to visit the flight deck and chat to the pilots, one of whom had tried to apply to CTC before and wished me luck! 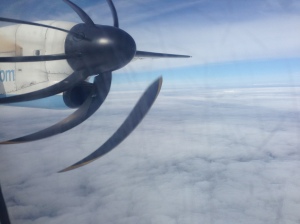 The day after my flight, I found myself at CTC’s selection base at Dibden Manor, nervously awaiting the day of testing and interviews! These have been covered in great detail by many other cadets before me (I’ll add some links to these at the end of this post) so I don’t really have too much to say! PILAPT is, and always will be, incredibly tough, but it is a nice relief when finished. The maths test I thought was generally easy, and the group test went very nicely; everyone I was working with was helpful and eager, which made working together a charm!

After lunch, we were given the interview schedule (CTC used to send unsuccessful candidates home at lunch, but stopped that when they realised those candidates never got any interview feedback). I had been given the first interview, as I had flown down and had to catch my return flight home that afternoon – so don’t worry about transport too much if you’re stuck on public transport like I was! This probably helped with nerves as I didn’t get lots of time waiting and worrying about what I’d say. In the end, the interview went amazingly well and felt more like a structured conversation than a harsh grilling!

I was finished at Dibden Manor by about 14:30 and headed straight back to the airport for my flight which was scheduled for 18:15. However, I was told just after passing security it would be delayed an extra 2 hours, which was quite infuriating as it meant I had to endure 5 hours in the rather small terminal there. In the end I found a small, cheap lounge and went in there because they had sofas which I ended up sleeping for hours on! Turns out getting up at 6 after a nervously sleepless night and going to a highly demanding day of tests is unbelievably exhausting…
The only benefit of such a late flight was that I was treated to some nice sunset views!

The morning after I arrived home, I woke up to see an email telling me I had passed selection! That was an amazing moment, I think I read the email about 10 times before it sank in… a little bit giddy from the excitement, I suggested I would like to start as soon as possible. However after realising the next available course would be with ground school also in New Zealand, for a full year abroad, I decided that starting in January and doing things the ‘traditional’ way by beginning in Southampton would be best for me!

Just yesterday I received a confirmation letter (along with a lot of paperwork) telling me that I would be starting as part of CP141 in January! There is a lot to work out before I can get going though, with loans, agreements, disclosures and all sorts to be completed. I also have my class 1 medical next week, where I’ll have to travel down to the CAA at Gatwick for the examination. I imagine that will make up my next blog post, as medicals are something I’ve heard a lot of people ask about!

Anyway, for now I should get back to completing the many forms I have. Thanks for reading, and I hope you enjoy following along on my adventure to become an airline pilot and fulfill my lifelong dream!

Oh, and as promised, here are some links I found useful when preparing myself for the CTC assessment!

View all posts by jettojig